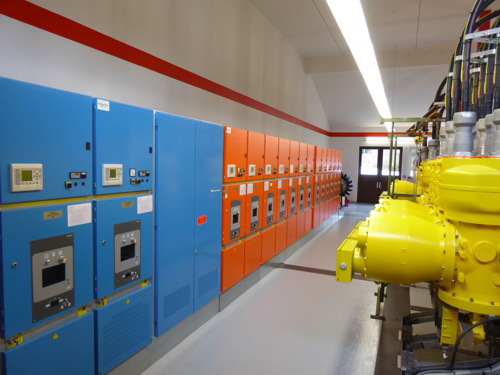 The company gives high priority to the environment and considers economic, ecological and social aspects. A core task of EBS is to convert Muota’s hydropower into usable electricity and make it available to customers in the supply area. EBS operates five hydroelectric power plants along the Muota – the Muota power plants. These were built between 1956 and 1970 and generate around 220 million kilowatt hours of electricity annually. This means that they cover around 70 % of the electricity requirements in their own supply area.

Since 2011, EBS has been monitoring the network infrastructure on the producer and customer side with FlowChie process control technology. The planning and implementation was carried out by Ertech Elektronik AG from Studen – general distributor and system integrator for FlowChief software in Switzerland. “There was no central system for network monitoring. Only small controls and panels on site were installed for operation and fault signalling. EBS was particularly impressed by the centralization concept. The underlying server client architecture considerably simplifies the operation, evaluation and further processing of data,” says project manager Michael Bickel from Ertech.

The external control systems, protective devices or transformer monitoring systems are connected via IEC 60870 and telecontrol components from SAE IT-systems. The telecontrol technology perfectly masters the interaction of transmission media such as GSM, dial-up connections (each 60870-5-101) and pure TCP/IP lines such as optical fibre technology (60870-5-104).

FlowChief visualizes, monitors and controls network components such as circuit breakers, protection devices or transformer monitoring on the network levels 6.3kV, 15kV and 50kV. In addition, data from the power plant control systems are evaluated. Critical operating states or faults in the components are automatically forwarded to the Pickett service by voice call. In addition to the transformer stations, 6 substations have already been recorded. ” Initially this was not planned by EBS,” says Michael Bickel.

For Ertech, Elektrizitätswerke Schwyz was the first project in this complex scope with the software from FlowChief. Meanwhile some more projects with similar tasks have been implemented.

Register here to use our online demo portal live.flowchief.de.

Let us create an individual and non-binding offer for you.